A humbling visit to Herculaneum and Pompeii

As a child, I used to love visiting model villages.  There was something wonderful about the sense of being a giant in another person’s world – gazing down on all their comings and goings as trains popped in and out of tunnels and ships ran on their preset courses into tiny harbours.  Last week I paid a visit to the cities of Herculaneum and Pompeii in Italy- and the feeling was reversed.  As I walked in and out of ancient houses, stepping on 2000 year old mosaics, I felt dwarfed, rather than being a giant.  In Herculaneum I felt dwarfed by the sheer scale of human tragedy involved.  Here were households and lives snuffed out in an instant – wooden shutters left open in sightless windows, slaves cowering in terror at the dockside as the town was engulfed.  In Pompeii the scale of an entire Roman city stretching off into the distance beggars belief.  There are small details too – a cartoon gladiator scratched on the wall 2000 years ago as a real one waited his turn to fight; a drinking fountain worn down as mouth after mouth pressed to it for a drink in the hot Italian sun.

From the Romans we inherited so many things – from straight roads and civil engineering masterpieces to understandings of political process. Here, though, was a humbling reminder that nothing lasts forever, no matter how great. Writing just 30 years or so before the eruption which wiped out these cities, James’ warning that we “do not know what will happen tomorrow” rings so true.

If you click for full screen on the slideshow below, you can select to ‘show info’ if you are interested. 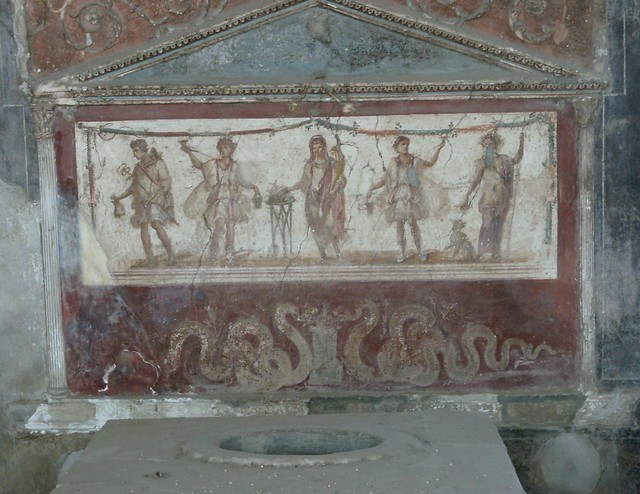 On a slightly lighter note, the pictures below tell a story all of their own. On the left is a mosaic in the entrance hall of a house in Pompeii warning visitors to ‘beware of the dog’; on the right is the modern equivalent in a local house. Nothing changes…

One thought on “The day the clock stopped”